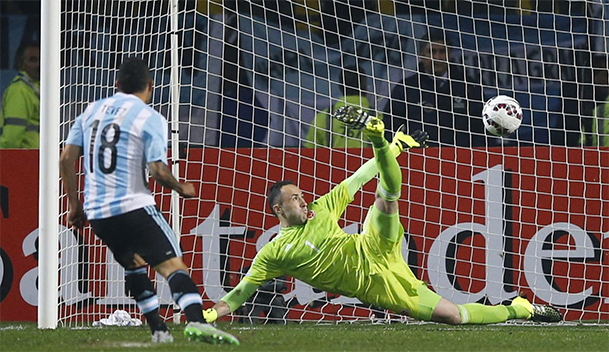 VINA DEL MAR, Chile (Reuters) - Four years after his miss in a penalty shootout sent Argentina spinning out of the Copa America, Carlos Tevez slammed home the winning spot kick against Colombia on Friday to book his country’s place in this year’s semi-finals.

After a goalless draw in which Argentina did everything but score against a Colombian side inspired by one of the tournament’s great goalkeeping performances, Tevez stepped up to beat David Ospina and seal the shootout 5-4.

Argentina will play either Brazil or Paraguay in next week’s semi-finals.

Tevez, who finished the job after team mates Lucas Biglia and Marcos Rojo had failed to deliver from the spot, chose to share the glory.