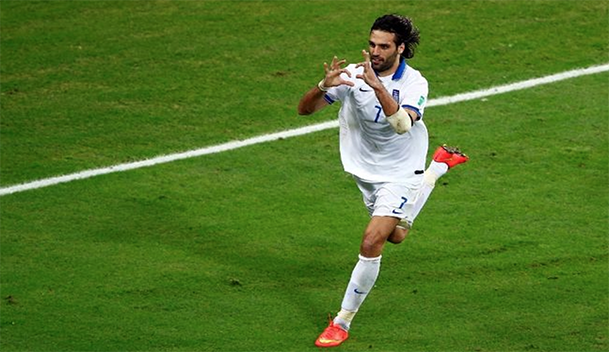 FORTALEZA Brazil (Reuters) - A stoppage time penalty from Giorgos Samaras gave Greece a dramatic 2-1 victory over Ivory Coast in their final Group C match on Tuesday and took them through to the knock-out stages of the World Cup for the first time. Samaras stroked home a controversial 93rd minute penalty after he was judged to have been tripped in the box by Giovanni Sio as the Greeks poured forward in search of a winner.

Replays showed that Samaras caught his foot on Sio’s calf, tripped and fell, but Ecuadorian referee Carlos Vera pointed to the spot and Samaras cooly converted the kick.

“We went for the win in the last 20 minutes,” Samaras said.

“I thought we controlled the game. They didn’t have many chances. It means a lot for the team and I hope we gave a lot of joy to the Greeks back home.”