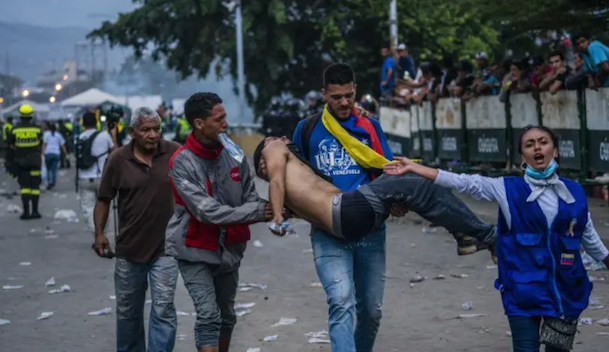 At least two people died and nearly 300 were injured on Saturday when a US-backed attempt to take humanitarian aid from Colombia to Venezuela ended in violence, after two trucks were set alight and security forces and anti-government protesters clashed.

The deaths occurred on the border with Brazil but most of the clashes took place on and around bridges linking the Colombian city of Cúcuta with Venezuela. There were chaotic scenes on the Simon Bolívar bridge — the main exit point for Venezuelan migrants fleeing economic collapse — as thousands of people tried to break a police blockade and clear a way for aid trucks.

They hurled stones at the police who responded with tear gas, shrouding the River Táchira that separates the countries in a pall of smoke. The trucks remained stuck in the middle of the bridge.