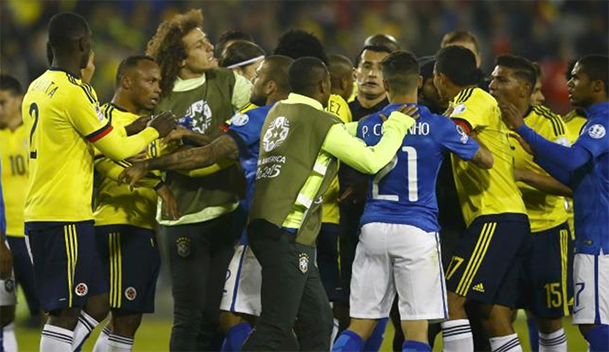 SANTIAGO (Reuters) - Brazil coach Dunga launched a stinging attack on referee Enrique Osses after the Chilean whistler sent Neymar off at the end of Wednesday’s tetchy clash with Colombia at the Copa America.

Colombia won the match 1-0, leaving Brazil needing a result from their final Group C match against Venezuela to be sure of making the knock-out stages of the competition.

Brazil will have to play that match without Neymar, who was booked by Osses just before halftime and then shown the red card after the final whistle when pretty much every player on the pitch was shoving and jostling near the centre circle.

Colombia’s Carlos Bacca was also given a red card and will miss his side’s final group clash against Peru.