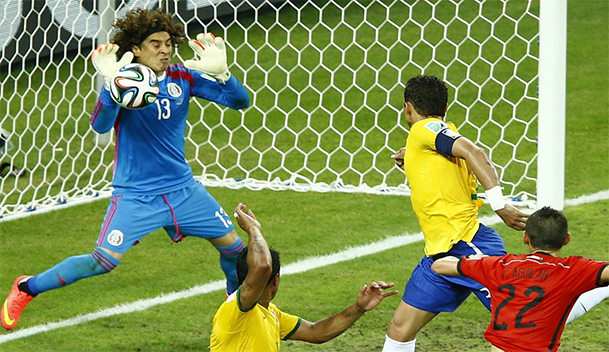 FORTALEZA Brazil (Reuters) - Mexican goalkeeper Guillermo Ochoa produced a series of superb reflex saves to restrict Brazil to a 0-0 draw at the World Cup on Tuesday and deny the Brazilians their 11th victory in a row.

In an absorbing Group A match in the deafening cauldron of Fortaleza’s Castelao arena, Ochoa thwarted Paulinho, Neymar (twice) and Thiago Silva when they seemed certain to score.

He was the last Mexican player to leave the pitch to a standing ovation by thousands of green-shirted supporters before being named man of the match.

“We should congratulate their goalkeeper who performed at least four miracles,” Brazilian striker Fred said after a frustrating afternoon for the hosts who failed time and again to unlock a stubborn Mexican defense.