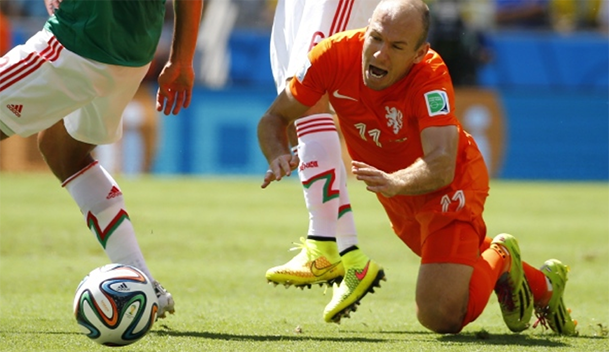 FORTALEZA Brazil (Reuters) - Netherlands substitute Klaas-Jan Huntelaar set up one goal and converted a penalty in the dying minutes as they recovered to beat Mexico 2-1 in an astonishing finale to their World Cup last 16 clash on Sunday.

The result condemned the unfortunate Mexicans, who were 1-0 up with two minutes to go and seemingly headed for the last eight for the first time since 1986, to a sixth second-round exit in six consecutive tournaments.

Dutch midfielder Wesley Sneijder broke Mexican hearts when he drilled home an unstoppable half-volley to equalise after a knock down from Huntelaar following a corner.

With extra time looming, the Netherlands’ livewire winger Arjen Robben weaved into the penalty area and went down under a challenge from Mexico captain Rafael Marquez.