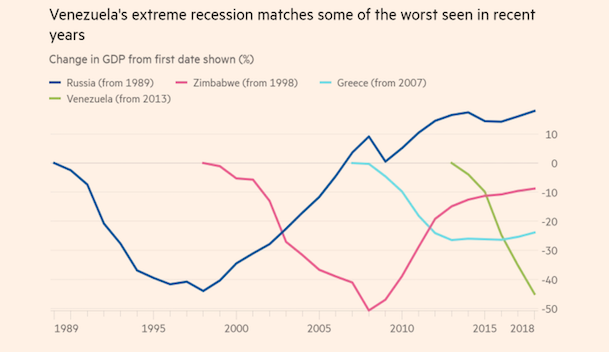 Inflation in Venezuela this year is likely to hit levels seen in the Weimar Republic in Germany in the 1920s and Zimbabwe a decade ago as the government continues to pump out bank notes in response to its deepening economic crisis, the International Monetary Fund warned.

The head of the fund’s Western Hemisphere department, Alejandro Werner, says he expects inflation in the Opec nation to hit 1m per cent this year, putting Venezuela up there with some of the most notorious cases of hyper-inflation in history.

In a blog post on the fund’s website, Mr Werner said the IMF expects the Venezuelan economy to contract by 18 per cent — the third consecutive year of double-digit decline — and that the worsening social crisis “will lead to intensifying spillover effects on neighbouring countries”, which have already taken in thousands of poor Venezuelan immigrants.